The history of Reiki is full of legends, not the least because, for a long time, the story was only transmitted orally from teacher to student. So while the Usui System is just eighty years old, we are still in the dark about the origins of this healing method. What we do know is how Reiki has spread throughout the world and the variety of forms it has taken.

When I did my first degree ten years ago, in February 1994, I heard the history of Reiki in the usual form of the legend. I received a summary of Mikao Usui, the founder of the Usui System of Reiki, and his achievement, and I heard of the path this system took as it spread all over the world. 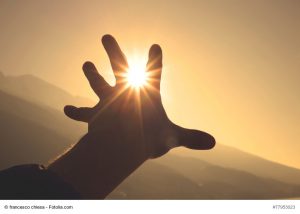 Since then, new information about Mikao Usui and his successors has emerged that enables us to see the history in another light. I now work as a Reiki Master and have studied this new data extensively. In doing so, I have gained knowledge that leads me to interesting insights. However, the way I tell the story in my Reiki classes has hardly changed, apart from a few details where the legend contradicts the facts. When I tell the history in my classes, it is not primarily to provide information, but to transmit the essence of Reiki. And the history of Reiki in the form of the legend is wonderfully able to do that. People who want to know more can find sufficient information in articles such as this one.

According to what we know now, the Usui System of Reiki was born when Mikao Usui had an enlightening experience on the Japanese sacred mountain, Kurama, during which the knowledge about Reiki came to him. He consequently passed this knowing on to thousands of people in Japan. This occurred, and still happens, through initiations that enable people to pass the universal life energy on to themselves and others by the laying on of hands.

Usui initiated a handful of people in the master degree. After his death in 1926, some of them continued his work, among them a group of Japanese officers who founded the Usui Reiki Ryoho Gakkai. This organization is seated in Tokyo to this day. Most of the new information about Usui’s work that has become public lately comes from sources that were or are in contact with this organization. Two people play central roles in this: the German Reiki Master, Frank Arjava Petter, and the Japanese Reiki Master, Hiroshi Doi.

When Frank Arjava Petter lived in Japan in the 1990s, he received (and subsequently published) a copy of the manual that Usui gave to his students, which is in possession of the Usui Reiki Ryoho Gakkai.

Hiroshi Doi, a Japanese Reiki Master, managed to become a member of the outer circle of the nearly inaccessible Usui Reiki Ryoho Gakkai. In this way, he learned further information about the work of Usui, which he has made public in books and articles. Mr. Doi has developed a new Reiki method that he calls Gendai Reiki Ho. It is partly derived from traditional Reiki according to Usui; the rest comes from elements he has developed himself. Mr. Doi says that his way is „a new, useful method of practicing Reiki for modern people.“

In addition to members of the Usui Reiki Ryoho Gakkai, other students of Mikao Usui passed on his inheritance. Among them, Dr. Chujiro Hayashi had a key position in spreading the Usui System of Reiki. As a medical doctor, Dr. Hayashi had a different approach to Reiki, which Usui supported. After Usui’s death, Dr. Hayashi opened a Reiki clinic in Tokyo. He composed a manual with detailed hand positions for the treatment of various illnesses. Among his students were many prominent members of Japanese society. Dr. Hayashi, who died in 1941, initiated a handful of people as Reiki Masters. Two of them are especially critical to the development of the Usui System of Reiki: the venerable Takeuchi and Hawayo Takata.

Takeuchi was the abbot of a small and remote Zen temple. He is supposed to have received a series of meditations from Dr. Hayashi, said to be the meditations Usui practiced on Mount Kurama. The venerable Takeuchi passed his knowledge on to Seiji Takamori, among others, and a strand of Reiki has come to the West through this lineage.

It is said that Seiji Takamori met with Hawayo Takata on his travels in the U.S. in the early 1970s. He passed this Reiki lineage, along with a number of teachings based on a study of Vajrayana Yoga, to Dr. Ranga Premaratna in the 1990s. After studying and practicing these teachings for a number of years, Dr. Premaratna began to teach the system under the name of Reiki Jin Kei Do.

The central role in disseminating the Usui System of Reiki, however, was played by someone else, namely Hawayo Takata. Through Takata, whom Dr. Hayashi had declared to be his successor, the Usui System followed a completely different route. She, and later her granddaughter and successor Phyllis Furumoto, carried the practice that was passed on to them in a form that became ever simpler on the surface. That simplicity made it more accessible to all people. In this way, the Usui System of Reiki developed into a worldwide healing method that became increasingly popular over the years.

For thirty years Hawayo Takata only taught the first and second degree of the Usui System of Reiki, especially on the island where she was born, Hawaii. Eventually she taught throughout North America and Canada. Only in the beginning of the 1970s did she begin to train masters. When she died in 1980, there were twenty-two Reiki Masters initiated by her. The majority of them have recognized Takata’s granddaughter, Phyllis Furumoto, as her successor.

Another Reiki Master initiated by Takata, Dr. Barbara Ray, also considered herself to be Takata’s successor. This situation led to a division in this Reiki lineage. Some of Takata’s masters, along with some masters initiated by Phyllis Furumoto, founded The Reiki Alliance to support one another in the practice of the Usui Shiki Ryoho (the name of the lineage that goes back to Dr. Hayashi).

Dr. Barbara Ray believed herself to be the only master who had received the complete Reiki system that Dr. Hayashi passed on. She went her own way and founded The Reiki Association, teaching what she called, „authentic Reiki.“ Over the years, change has come to this system as well, and Dr. Ray no longer considers her teachings to be a form of the Usui System of Reiki. Now she calls it the Radiance Technique®. Among the masters that she has trained, some have parted ways and continue to teach the system of „authentic Reiki.“

Finally, Phyllis Furumoto, the granddaughter of Hawayo Takata, has played a decisive role in the development of the Usui System of Reiki. Most Reiki students in the world consider her to be the leading person. In 1988, at a conference of The Reiki Alliance, she shared her thoughts that she was not the only one to initiate masters in Usui Shiki Ryoho. From that moment, a stone began to roll that soon brought an avalanche. Many masters began to initiate new masters, even shortly after their own master initiations, often with good intentions but without sufficient experience. In the eyes of many people, this has led to a dilution of the Usui System. In the recent past this view has caused numerous conflicts among Reiki Masters of different lineages.

However, it has also forced the door open to a development that brought completely new forms of the healing method of Reiki, most of them based on Usui Shiki Ryoho. For example, Walter Lübeck, who was initiated as a master by Brigitte Müller, a student of Phyllis Furumoto, developed a new form of Reiki that he calls Rainbow Reiki. As Walter Lübeck puts it, this style of Reiki „consists 20% of the traditional basis and 80% of personal development.“ He links Reiki with shamanism, working with auras and chakras, etheric dimensions, pendulums, power centers, and much more.

Another development of Reiki that is meant only for Reiki Masters comes from the USA: Karuna Reiki® from William Rand. The American, who received master initiation from four different Reiki Masters, developed this new system based on channeled symbols that promise a heightened vibrational frequency and a strengthening of the healing energies.

Himani H. Gerber also developed another Reiki style in the surroundings of the Indian master Osho, who baptized it personally with the name Osho Neo-Reiki. In addition to traditional elements, this Reiki style includes working with chakras, an introduction to the Osho kundalini and dynamic meditation, and further training in energy work.

There are many additional styles of Reiki that, as far as I know, are little known so far. Lately, several forms of Buddhist Reiki have emerged that do not trace their spiritual lineage back to Mikao Usui but to the Buddha. There could be a connection between the symbols and initiation rituals used in the Usui System of Reiki and certain scriptures of the Medicine Buddha, which are part of Naropa’s higher Yoga Tantra, the Tantra of the Secret Initiations. A new Buddhist form of Reiki, for example, is Ngal So Chag Wang Reiki. It is based on a new lineage, recently brought into being by the Tibetan Lama Healer T. Y. S. Lama Gangchen Tulku Rinpoche.

Throughout these brief eighty years that Reiki has spread in the world, the foremost characteristic seems to be change. And not just in the variety of forms that the Usui System has taken over the years, but also in the work of hundreds of thousands of Reiki Masters throughout world. They mostly consider themselves to be „independent masters“ and do not belong to any specific form of the Usui System.

All people who teach or practice Reiki—in whatever form—share, of course, just as before, the practice of laying-on hands. The purpose of this simple practice is to give universal life energy to themselves and to others. One becomes enabled to do that through initiations performed by a Reiki Master. The integrity of the individual teaching and practice is, in my experience, not dependent on a specific form. That comes from an energetic lineage and someone’s personal spiritual direction. The latter is, I think, particularly important, because it is rooted in the here and now and directed to the future.

Oliver Klatt has practiced Reiki regularly since 1994. He is the editor-in-chief of the German Reiki Magazin since 2001. In November 2000 he was initiated as a Reiki Master by Paul David Mitchell, one of the twenty-two masters initiated by Hawayo Takata. He gives Reiki classes in Berlin and elsewhere in the German Republic.